With 2022 more than halfway gone, we figured it was time to wrangle some of our favorite records into a loose collection. What follows is a selection of heavily rotated records released in 2022 so far.

After a seven-year hiatus, Jack J, the Mood Hut records head and Pender Street Stepper, released his debut album after a series of singles. It’s worth the wait. Surprisingly, the master mood-maker departs from his branded and perfected Vancouver house sound in favor of a diverse and introspective work of melancholic ambient jazz (with beautiful sax contributions by Linda Fox), Adrian Sherwood and On-U-inspired digi-dub, and yacht-ready indie rock groovers. Opening the Door has been on heavy, heavy rotation here, especially the vintage Arthur Russell-esque standout Only You Know Why, and will be for some time to come as we eagerly wait for the LPs to drop. Keep an eye out for those soon. – DM

On the heels of a recent trilogy of self-released works, as well as a huge favorite from last year with Triz, Philly’s Pontiac Streator returns to Huerco S.’s West Mineral Ltd. with a stunning therapeutic bouquet of slow churning IDM beats and drifting glitch ambient, all freckled with a series of spoken word snippets creeping through the thick hypnotic haze. Loaded with guest contributions from the West Mineral family — Ben Bondy, Perila, Nikolay Kozlov, and Protozoa Project all pitch in — Sone Glo may be his most elaborate and best to date. A deep, inventive, and psychedelic maze of beat-oriented bliss, Pontiac is truly onto some of the most exciting electronic music being made today. Dive in. – DM


HTRK – Death is a Dream

The HTRK show at Zebulon a few months ago was probably my favorite so far this year (maybe tied with the CS+Kreme one…). So, of course, this album of highway demos, vignettes, and sketches from Rhinestones has gotten a lot of play. Jonnine’s voice sounded even better live than on the recording and, in a similar way, these rough versions somehow hit a deeper, more intimate note than the already sparse originals. The acoustic guitar on Fast Friend is great and gives it an almost country-blues feel. New tracks Renaissance, Devil Do, No Big Thing, and Death is a Dream are essential too… – Phil

New York experimental guitarist Mary Halvorson has explored so many expressive avenues with her instrument, both solo and via collaborators including John Dieterich (Deerhoof), Marc Ribot, and Weasel Walter, that whatever she does will likely be a shock-of-the-new experience. On Amaryllis, the MacArthur Grant recipient Halvorson took to a studio and, with a sextet, laid down an explosive, relatively straight-ahead jazz record. A master class in the form, it features the guitarist aligned with expert improvisers Patricia Brennan (vibraphone), Nick Dunston (bass), Tomas Fujiwara (drums), Jacob Garchik (trombone), and Adam O’Farrill (trumpet). Simultaneously, Halvorson also issued Belladonna, a six-song suite featuring the Mivos Quartet. It’s her first time composing for string quartet, and, predictably, she reimagines the form to match her needs. Listen to Haunted Head, though, at your peril. The 10-minute piece will likely worm its way into your brain and reconfigure your very core. – Randall


Kaitlyn Aurelia Smith and Emile Mosseri – I Could Be Your Dog

LA neighbors and sonic composers Kaitlyn Aurelia Smith and Emile Mosseri have introduced a gorgeous collaborative record that fuses their dreamy melodies and warm textures to create a lush, scenic world. I first heard Emile Mosseri’s music through his Oscar-nominated film score for Minari a few years ago and was deeply moved by how nostalgic and visceral it was. Smith was enamored by his work in The Last Black Man In San Francisco and reached out. Through a mutual appreciation of each others creative processes, they harmoniously converged to create an expansive and delicate body of work. The tracks fluidly transition into one another with bubbling chirps, ambient echos seamlessly woven together with earthly synthesized sounds. My favorite is the title track, which opens with a soft and ethereal vocal verse and fragmented melody that nods a bit to the world of Daniel Lentz’s ‘Miss Umbrarum’. I love this record so much. Highly recommend if you’re looking for something bright, poetic & contemplative to melt into. – Radha

Sessa’s ‘Estrela Acesa’ is a sun-kissed and sensual Brazilian record to enjoy these warm summer days to. Swirling between emotive, dream-like samba-soul and vibrant bossa nova, these tracks feel soothing and evoke a sense of deep nostalgia. The orchestrations yield a shimmering mosaic of sound that celebrates some of Brazil’s greats. Masterfully arranged with sweet string melodies, soft flutes, and delightful rhythms, this record will transport you to another realm. Sereia Sentimental, Irmão de Nuvem and ‘Helena’ are must-listens. Perfectly timeless album! – Radha

Oren Ambarchi has teamed up with John Berthling and Andreas Werliin of Sweden’s free-jazz-psych outfit Fire! for this four-track burner. Recorded live at the Stockholm studio in late 2018, it’s propelled by motorik rhythms and repetitive bass patterns that dial into breath-like circular grooves. Guitar and electronics supply textures that suggest Can. They shimmer and swirl to elevate the headspace, with Ambarchi playing Irmin Shmidt to John and Andreas’ Holger Czukay and Jaki Liebezeit-esque cadences. Spacious yet fiercely focused, the album acts as an incantation much in the same way krautrock and spiritual jazz tunes of the past have tapped into ritual-like spaces. Top-tier, modern music for discovering your inner sanctum. – John

Upon first listening to Seoul-based electronic production duo Salmanda’s Ashbalkum, I was briefly taken over with memories of my childhood neighborhood. The days of exploring trails, jumping fences, and allowing the mundane to feel magical. The perfect storm of minimal arrangements, friendly rhythms, and sweet melodic lines may have initiated the trip down memory lane. Glowing tones feel as though they’re wrapped in blankets, gently vibrating in a round, buoyant manner. The drum programming is masterful in the way that they retain a casual organic feel. While absorbing these ten tracks, it’s easy to imagine a day of laying in the grass picking shapes out of the clouds, and snacking on gummy bears. Uman and Yetsuby’s productions are playful yet sincere, and how they maintain that balance makes each repeated listen more enjoyable. – John


Mr. Fingers – Around the Sun

Just in time for summer, Chicago house music innovator Larry Heard broke a four-year hiatus to continue defying the odds by delivering his almost 15th full length album of original material in ‘Around The Sun Pt. 1’. Staying true to the albums descriptor, Heard returned to his pioneering Mr. Fingers alias with ten tracks of warm, Balearic-infused soulful deep house and downtempo. Expertly produced with features of live jazz instrumentation from local musicians in his hometown of Memphis, this is the now 62-year-old master still at the top of his craft and creativity. – Jonny

After scores of sold out shows internationally, John Caroll Kirby’s fresh release on his long time label Stones Throw delivers. ‘Dance Ancestral’ features an eclectic array of collaborators, foremost Canadian producer Yu Su, who Kirby worked closely with to develop this 9 track record. Laaraji anoints listeners with his blissful zither, and a voice that sounds as if it’s coming from deep in the cosmos on the first track, “Dawn of New Day.” Kirby on the Rhodes floats along in a radiant intro to this explorative release. There are so many surprising creative devices that are artfully used, like delightful tropical field recordings and seductive bass lines that fuse tracks together on Repettos for You My Lord and Pause on the Ancient Ballcourt. Perfect for home listening. – Tana

Umiliani is famous for compositions used in spaghetti westerns and Italian TV, but this more obscure release from 1971 finally got a contemporary reissue in March by Four Flies Records. Paesaggi translates into “Landscapes,” and the meandering and rolling compositions indeed elicit visions of pastoral wonderlands. Risaie is a personal favorite, with its charging drumbeat that punctuates tender keyboard melodies — and Alfio Galigani on the recorder. Laguna Tropicale is Umiliani’s take on bossa nova, and it’s a sweet seaside treat that is everything we love about library music. If you love this records as much as I do and want more, check out our exploration of Italian Library records of the 70s and 80s. – Tana 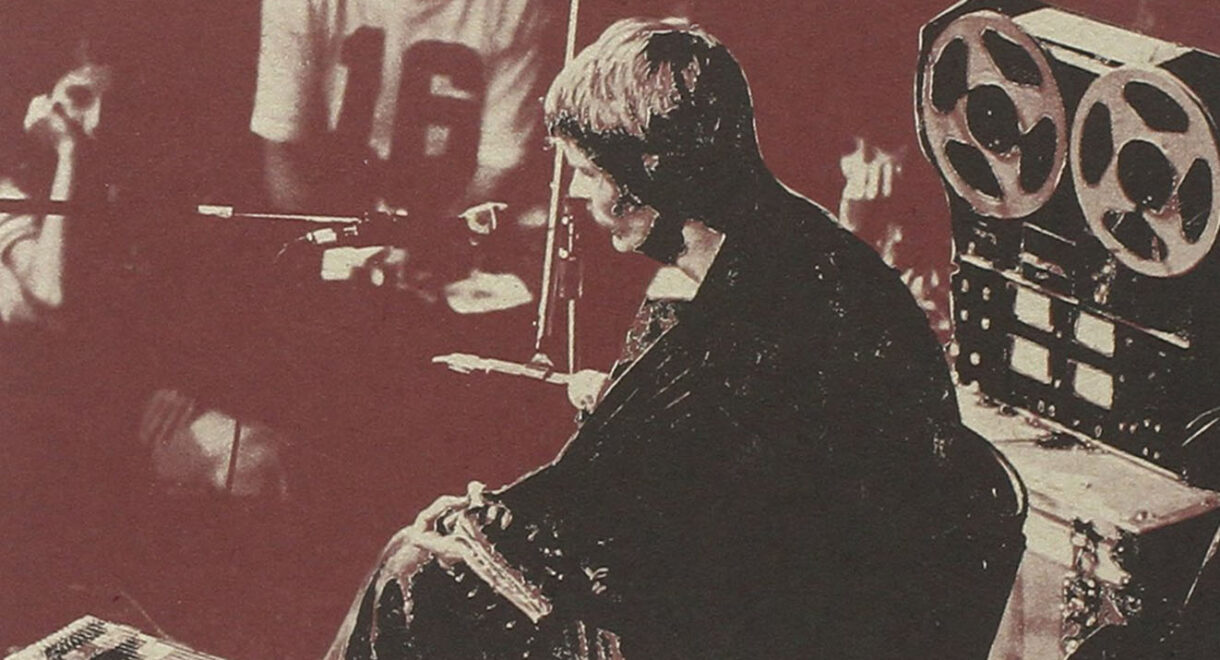