Looking for a classic vintage power amplifier? The Dynaco ST-70 needs to be on your radar if you crave that classic EL34 tube sound.

Not all vintage buys are wins. I hate to burst that bubble with this week’s installment, but it needs to be said. Now that I’ve had a few years to try a lot of vintage equipment, restore it, and experiment with a lot of amplifiers, turntables, CD players, and loudspeakers – I’ve discovered more than a few dogs along the way. None of that diminishes the excitement I get from the equipment that has taken up permanent residence in my systems at home, but reality bites sometimes.

Two companies that have recently struck my interest are Dynaco and Heathkit; specifically their homebuilt kits which to some degree you can still buy. DIY amps, receivers, and audio scopes were not uncommon in the 1960s and 1970s. There is certainly a cult of people in the vintage audio community who love both brands; I’ve noticed that a number of high-end audio dealers have a constant flow of Dynaco ST-70 power amplifiers available for sale at really high prices so there must be some demand for it.

Heathkit and Dynaco sold products that featured quality components, detailed instructions and could be completed over the course of a few days with decent soldering skills and patience.

The products were available factory-assembled, but what made all of these specific pieces unique was that they were mostly assembled by hobbyists. Some of these people were quite skilled and knew what they were doing. The finished product could be excellent, or really terrible if the person made serious mistakes.

This week, I’m going to dig a little deeper into my own personal experience with two Dynaco and two Heathkit models that I purchased. The results varied from excellent to horrific nightmare worse than the 4 consecutive Super Bowl losses by my beloved Buffalo Bills in the 1990s.

Dynaco was formed in 1955 by Ed Laurent and David Hafler in Philadelphia, and the brand quickly became popular for its affordable and wide range of audio components. The ST-70 stereo tube amplifier was its most popular component; Dynaco sold more than 350,000 units before the brand was liquidated in 1980.

David Hafler had become popular in the Hi-Fi world in the 1950s with his brand, Acrosound. The company had developed high-quality output transformers for use with DIY home electronics and when Hafler moved on and formed the new company with Laurent, they realized that there was a big market for build-it-yourself kits.

The Stereo 70 (ST-70) was Introduced in 1959 and was available as a kit (Dynakit) intended for assembly by the purchaser or as a complete factory-wired unit. The ST-70 used four EL34 output tubes, one GZ34/5AR4 rectifier tube, two 7199 input (driver) tubes, two output transformers, one power transformer, and a preassembled printed circuit board (PCB) containing the driver circuit. The power output was 35 watts/channel.

My journey with the ST-70 started off without a lot of drama; my wife located one that was for sale at a record store in Vermont and we made the trip for New York to take a look. What gave me confidence was that it was the personal unit of the shop owner and he knew everything about it and it’s always reassuring to have the history of a piece of vintage audio equipment before you open up the wallet.

After we agreed on a price, he packed it up really well for our journey back to Buffalo, where it now resides at the home of our neighbor. He has helped me with a number of vintage audio projects, and it seemed like the best way for both of us to enjoy the product. The vintage audio community really has a different attitude in regard to trying products out.

Since the purchase, the RCA plugs have be updated and the small hum it developed was remedied by placing it on a book or some vibration isolators. DIY indeed.

The 35 watts/channel power rating gives one some latitude with loudspeakers; I’ve mated it successfully with every bookshelf loudspeaker I’ve tried with it and it’s a workhorse of an amplifier.

The overall tonal balance is quite warm, and I love the powerful presentation that it can deliver with the right pair of loudspeakers. The EL34 is one of my favorite output tubes; for both its tone and the availability of tubes (both new and NOS) from dealers online.

I can recommend the ST-70 with the one caveat that you really need to understand the owner/builder and learn as much history as you can about the specific sample that you find. None of the tubes are very expensive to replace, but you don’t want to get into the business of buying new output transformers when you’re spending a decent amount of money on this kind of amplifier.

Parts are readily available from a number of online dealers so you’re never going to be left out in the woods with the ST-70. The amplifier is a really a great looking piece of equipment and an iconic piece of audio equipment.

Another Dynaco amplifier that I purchased was the STA-120. It has a similar case like the ST-70, but that’s where the similarities end. The STA-120 is a 60 watts/channel solid state amplifier, which was rather powerful for the period. I had read numerous very positive reviews of this amplifier, so I made the decision to purchase one without any hesitation.

When I got home and connected the amplifier to the rest of my system, I was somewhat shocked by the differences between the two amplifiers. I was very puzzled by its sonic presentation; cold and distant and nothing changed when I increased the volume level.

I wondered if I had created a mismatch between the power amplifier and the pre-amp, so I began trying other preamplifiers and loudspeakers. Nothing improved. In some cases, the changes made the amplifier sound even worse, and I could barely get through a few songs before turning everything off.

I conducted a more thorough examination of the amplifier and did some more research online. What I discovered made me feel that I had wasted money on an amplifier that could be restored and modified with some rather expensive parts but that I was not really listening to a Dynaco STA-120 at that point. This was definitely a huge miss. Not an amplifier that I could recommend.

Heathkit have been around since the 1920s and are still making kits available for sale.

They sold just about every type of electric/electronic kit that you can think of for you to build; their radio kits being the most popular. In the 1960s, they sold tube amplifier kits like the AA-100 which looked and sounded great – but only if the hobbyist knew what they were doing.

I found a model AA-21D transistor amplifier and purchased it just because of the industrial design. It reminded me of a ‘60s car dashboard and it was a very clean example.

When it arrived in the mail, I was impressed by the level of packaging. The previous owner clearly wanted it to arrive in perfect working condition and without any dents or new scratches.

The power button (hidden behind the logo) was quite clever, and I became very excited to use the amplifier.

All the “dashboard lights” came on but that was it. No sound, not even white noise. I opened up the case and checked the usual suspects. I discovered the issue rather quickly. This unit was designed with a handful of self-resetting glass breakers.

They were advanced technology a few decades ago (apparently), but every single one was broken inside the unit. I also discovered that replacements were not that easy to locate. The Heathkit has in the repair shop for 6 months. This product earns a “miss” at this point.

I was a little depressed after misstep. You want a vintage component to work out but it’s never a good scenario when it’s DOA.

But did I swear off Heathkit for life after this disappointing experience?

Nope. I’m a curious type of person and there was another Heathkit product that I really wanted to find.

After seeing an audio scope for the first time, I was hooked. I needed one. The “Holy Grail” of audio scopes is the Pioneer SD-1100; a rare component that is prized for its beautiful silver front faceplate, audio oscilloscope, and VU meters. A non-functioning sample of this product fetches more than my audio budget allows.

Much to my delight, I discovered the Heathkit Model AD-1013. In a moment of pure madness, I purchased two samples that came with the original build manuals. The price was right, and I hedged my bets that at least one model would work properly with some restoration.

Karma is a thing. Sharing with others in the community must have earned me some luck because the first unit worked perfectly, and the second unit only required a replacement CRT tube that I was able to source on eBay for a reasonable price.

These audio scopes allow you to troubleshoot L/R channels which is extremely helpful when testing vintage equipment. What I use the most is the “stereo” setting which allows you to see (not just hear) the channel separation. It’s neat to see a well-engineered and produced track on the scope — and easy to see one that isn’t. If you already own or want an audio scope, you need to check out the rather interesting “Audioscope” music being created by Jerobeam Fenderson.

Both of these brands offer some great value in the vintage audio category, but you really need to do your homework and ask the right questions. The Dynaco ST 70 is a very special audio component that can work in a lot of new systems; not just the vintage variety. Partner this amplifier up with a good pre-amplifier and it delivers so much presence and gestalt with music. If you can find one in perfect shape and you have the right loudspeakers – a very smart purchase. 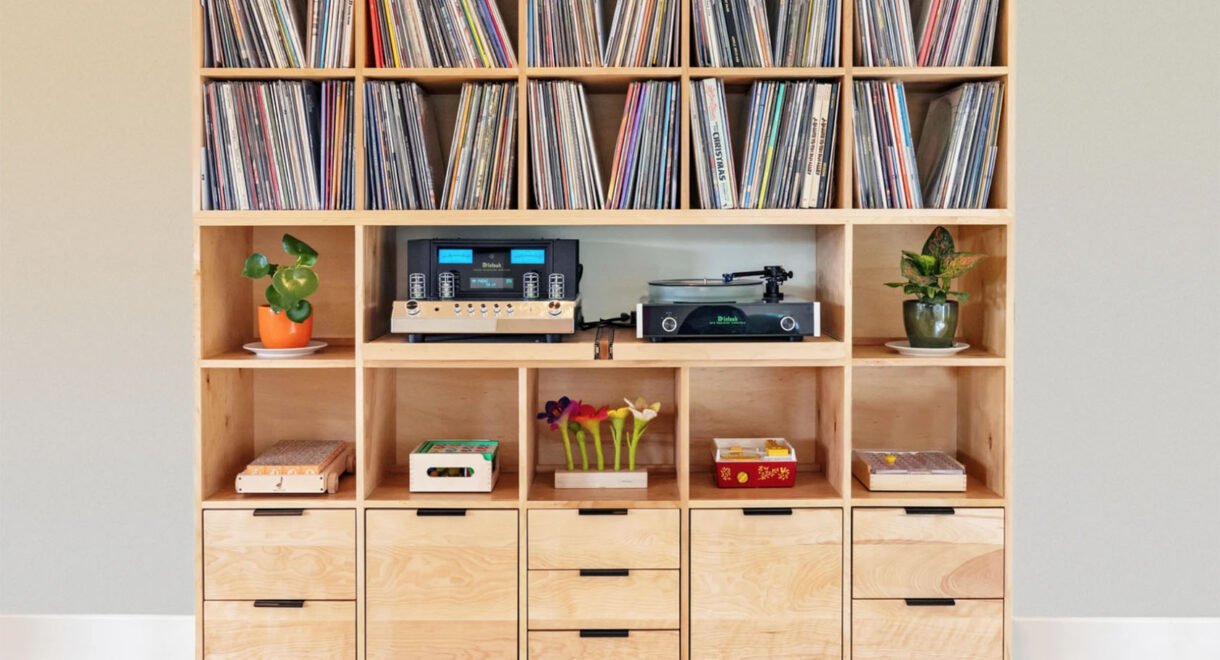